“This is going to be my year. Write that down.”Sitting down to speak to Goal and Voetbalzone back in July, PSV teenager Mohamed Ihattaren was in confident mood.Having made his senior PSV debut as a 16-year-old six months previously, and become a regular in Mark van Bommel’s matchday squad for the remainder of the campaign, he probably had every right to be. Article continues below Editors’ Picks Ox-rated! Dream night in Genk for Liverpool ace after injury nightmare Messi a man for all Champions League seasons – but will this really be Barcelona’s? Are Chelsea this season’s Ajax? Super-subs Batshuayi & Pulisic show Blues can dare to dream Time for another transfer? Giroud’s Chelsea spell set to end like his Arsenal career Certainly, his performances so far this season suggest that his bold proclamation for 2019-20 was spot on.A return of three goals and five assists in 11 appearances only scratch the surface of his impact on the current PSV team, with fans from around the Netherlands now of the opinion that Netherlands has found its next great playmaker.Brought up in Utrecht, Ihattaren moved to Eindhoven having been spotted by PSV scouts during a series of talent days.”I never really wanted to do anything else; I just wanted to play football,” he recalled to Goal.”My brother told me that a PSV scout had been in attendance at a tournament I played in and he said I would receive an invitation. And, when that eventually dropped on the doormat, I immediately knew what it was about.”They organised a talent day on a Sunday, where you got the chance to show what you can do. I went to two or three of those and then they told me they wanted me to stay.”Ihattaren – who has Moroccan roots and could still play internationally for the north African nation (he has delayed such a decision while his father fights cancer) – flew through the various youth sides once at PSV, playing above his age group at every level.”The way he developed was spectacular,” former PSV and Manchester United striker Ruud van Nistelrooy, who now coaches PSV’s Under-19s side, told Goal.”He joined us from the U17 team in the U19s but he was younger than everyone, so I thought he’s going to need at least a season to develop and get used to things, but he developed like a rocket really. 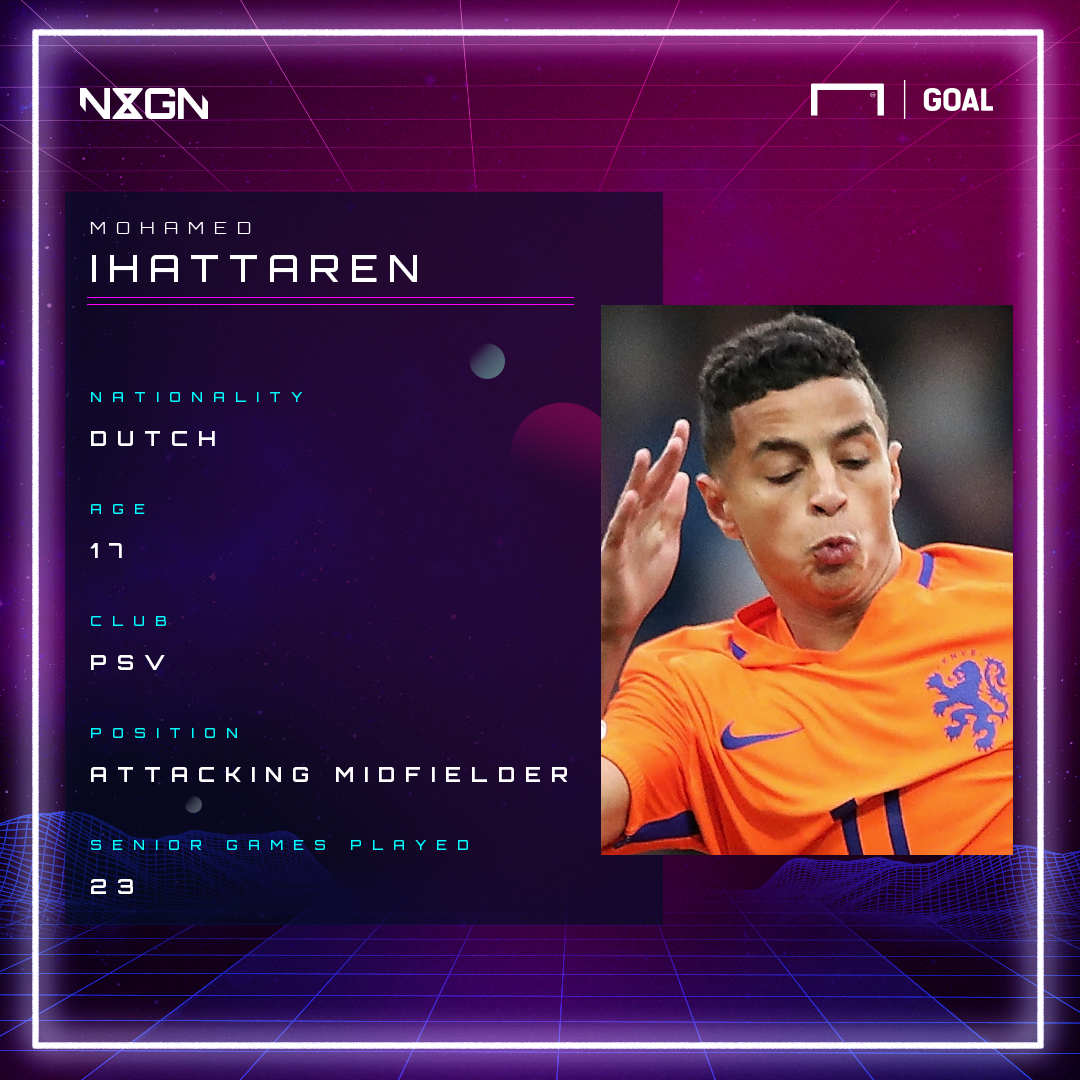 “He joined the winter break training camp with the first team last season and he just blew everybody away. That’s not normal with a player who is 16 years of age, of course. “I was saying to him: ‘I want to develop you so that you will make the step to the first team and then I don’t want to see you back here anymore.'”That’s the way I think it should be because for players who go and come back it’s very difficult. He managed to develop himself at such speed that he left and we never saw him come back.”It was at that aforementioned training camp that Van Bommel got a first glimpse of Ihattaren in a senior environment, having previously worked with him at U19 level. Unsurprisingly, he was impressed.”He has the quality with the ball that is extraordinary for his age,” he told Goal. “And it’s good that he is with us because he is developing really well. “He’s 17 but I think he’s learning more than at the youth academy because he was at the top of the youth academy. And no matter if you are 16, 17 or 19 – if you are good, you have to train with the first team.”Ihattaren has not looked back since making his debut for Van Bommel’s side as a last-minute substitute against Groningen on January 26.He went onto make a further 15 Eredivisie appearances before the end of the campaign, including four starts, and though he was unable to score or provide any assists, his potential was already clear, leading to him being named in Goal’s NxGn list of the best 50 teenage footballers on the planet in March.Such hype predictably saw the teenager begin to be linked with a host of Europe’s top clubs, with Chelsea and Manchester City cited as potential destinations. PSV moved quickly, though, and in March tied Ihattaren down to a new contract that will keep him at the Philips Stadion until at least 2022.”I have always had a clear plan and I am following that plan at the moment,” he said. “The preference was always to stay at PSV; that was the sensible thing to do.”Money is not the most important thing, in my opinion. I am still young and have a lot to learn. I am improving all the time still. I need to achieve a lot more before I can start thinking about the next step in my career. “I want to become the star player at PSV as soon as possible. I want to become important for the club, make the fans happy and win the title – more than once.”And then in the end, I would like to earn a big transfer. But I am happy at PSV for now and in no rush to move on.”With his future not up for debate in the short term, Ihattaren has wasted no time in beginning that path towards becoming the club’s star player.His first goal for the club came on August 18 against Heracles and he backed it up by netting in each of PSV’s Europa League qualifying matches against Apollon Limassol before the month was up. 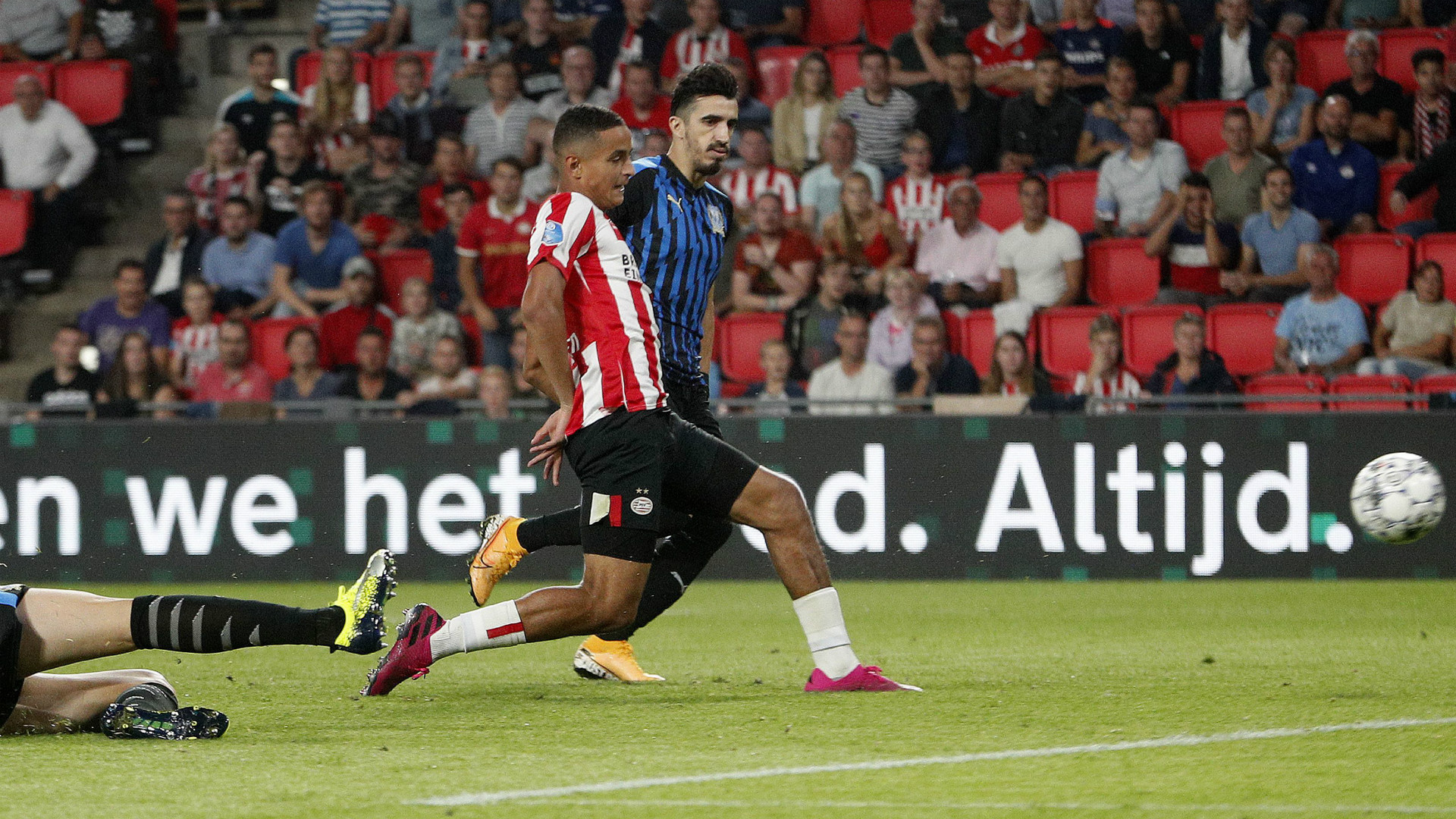 Fast-forward into September and he became the youngest ever player to provide two assists in a Europa League match as PSV kicked off their group campaign with a 3-2 victory over Portuguese giants Sporting CP.Given Ihattaren openly admits that he idolised the creativity of Ronaldinho as a child, his playmaking ability comes as little surprise, even if he is showing footballing maturity beyond his years.”He has the quality to make the right decision in a difficult situation. And that’s not normal,” Van Bommel explains. “We speak about if you have a good decision in a difficult situation then that’s good. But it’s not always like that and he’s only 17.”He’s playing with the older guys and he does the same things he did at the youth academy. If you can do that, then you’re a good player.”Ihattaren still sees room for improvement, particularly in the less attractive aspects of his game, saying: “I have to become more efficient and become more consistent when it comes to the defensive side of my game. I can’t let it happen that I track back one time and then slack off the next. I consistently have to play at a high level.”Given how rapidly he has risen through the ranks to become the beating heart of a top European club, there are few doubts that he will quickly be able to adapt his game to allow for such an improvement.From there, the sky seems to be the limit for a player who does not even turn 18 until February.”I must admit that I don’t really like talking about myself, but I do think I’ve got something special,” Ihattaren concludes when weighing up his own potential.Right now, even that is looking like an understatement.