Had Vincent Kompany not been so intelligent he could well have been a Manchester United legend.It sounds like the sort of dig Manchester City fans would aim at their bitter rivals but the teenage Kompany could have moved to Old Trafford when he was spotted by scouts for Sir Alex Ferguson.Instead, Kompany’s parents told him to concentrate on his studies and he eventually found his way to Manchester to become a hero in the blue half of the city. Article continues below Editors’ Picks What is Manchester United’s ownership situation and how would Kevin Glazer’s sale of shares affect the club? Ox-rated! Dream night in Genk for Liverpool ace after injury nightmare Messi a man for all Champions League seasons – but will this really be Barcelona’s? Are Chelsea this season’s Ajax? Super-subs Batshuayi & Pulisic show Blues can dare to dream On Wednesday he returned, now with a Masters Degree in Business, for the first time since ending his 11-year stay as the club’s most successful captain – with four Premier League titles, two FA Cups and four League Cups also on his C.V.More than 50,000 people are expected for his testimonial on Wednesday evening – a game that will see the profits go to the homeless charity Tackle4Mcr. There will be legends from both sides of the Manchester divide playing, although Kompany will typically miss the match with a slight hamstring strain.Injuries sadly had an increasingly significant effect on the latter part of his career, but even when he couldn’t make the same indomitable impact on the pitch he always remained an influence around the Etihad Stadium.Kompany joined City from Hamburg for just £6 million in 2008 in what Mark Hughes maintains was the best bit of business in the club’s history.Not only was he a hugely-promising defensive midfielder, destined to mature into a top-class centre-back, he was already a leader.He became the perfect captain to control an ego-crazy dressing room as it evolved from a top-four challenger into a title winner for the first time in 34 years. 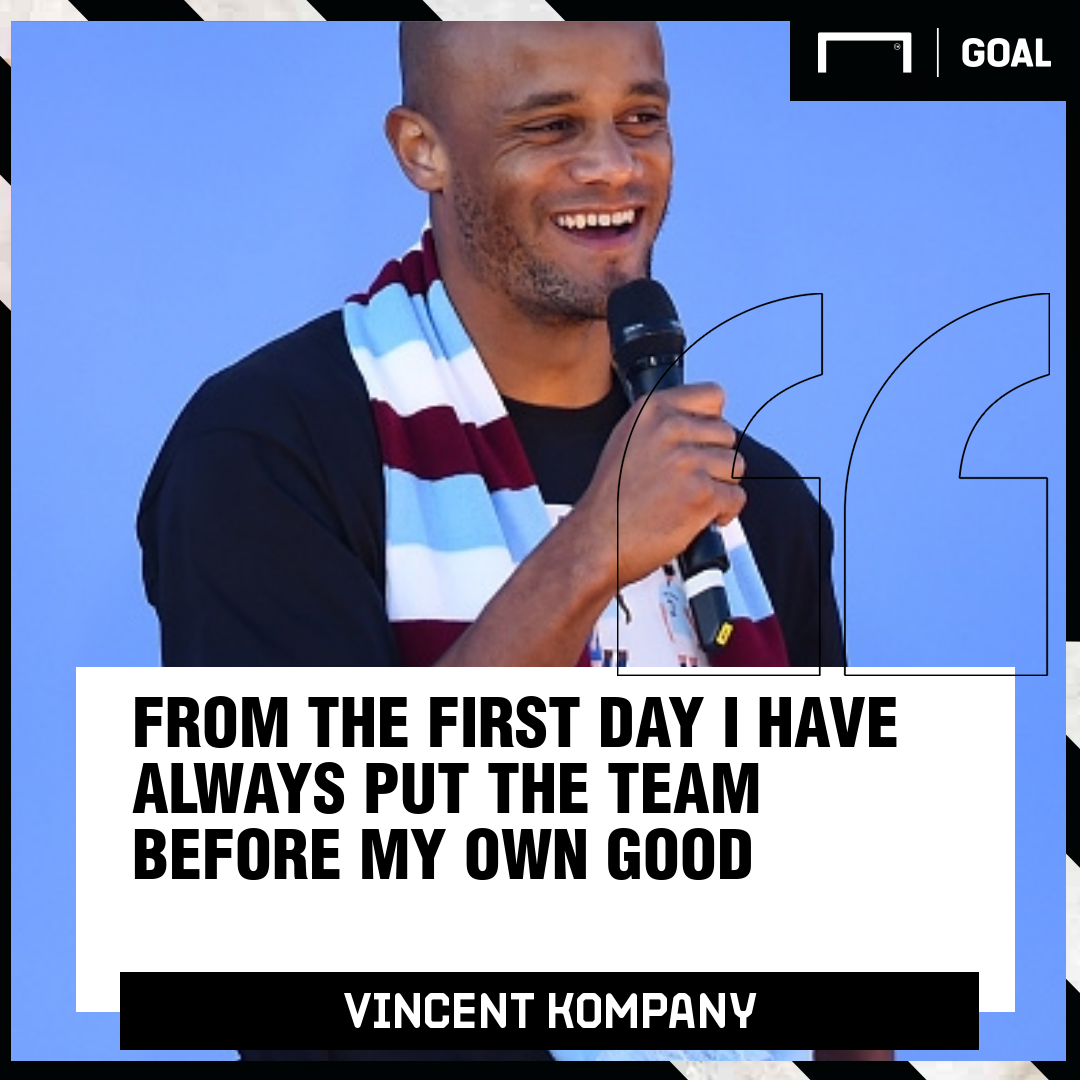 “I think I walked through the door being humble still. I was a leader from the first day but being a legend, you can’t predict those things,” he said ahead of the match.”Now I am a much calmer leader. In my first year at City, if I saw something wrong then I had to act. I was pushing, pushing, pushing constantly, fronting people and if I needed conflict I would until we got it right.”From the first day I have always put the team before my own good. There were many players who were bigger players than myself or were promised a better future or earning more money than I was.”There was a core, including Joe Hart and Nigel de Jong, in the early days we were really holding a lot together, making sure the club was bigger than any individual. That looks normal now, it wasn’t the case back then.”I think as a group of players, we had a big impact in shaping the culture from the inside.”It’s no surprise that an all-star friendly would attract every big name available from City’s recent history.Kompany would often be on hand to try to defuse Mario Balotelli’s tantrums. He helped Sergio Aguero and David Silva settle when they arrived in Manchester with barely a word of English. He has guided plenty of youngsters, such as Stephen Ireland, inside the intimidating first-team dressing room. All these players will be at the Etihad.Others such as Yaya Toure and Kevin De Bruyne would have been there were it not for their club and international commitments. 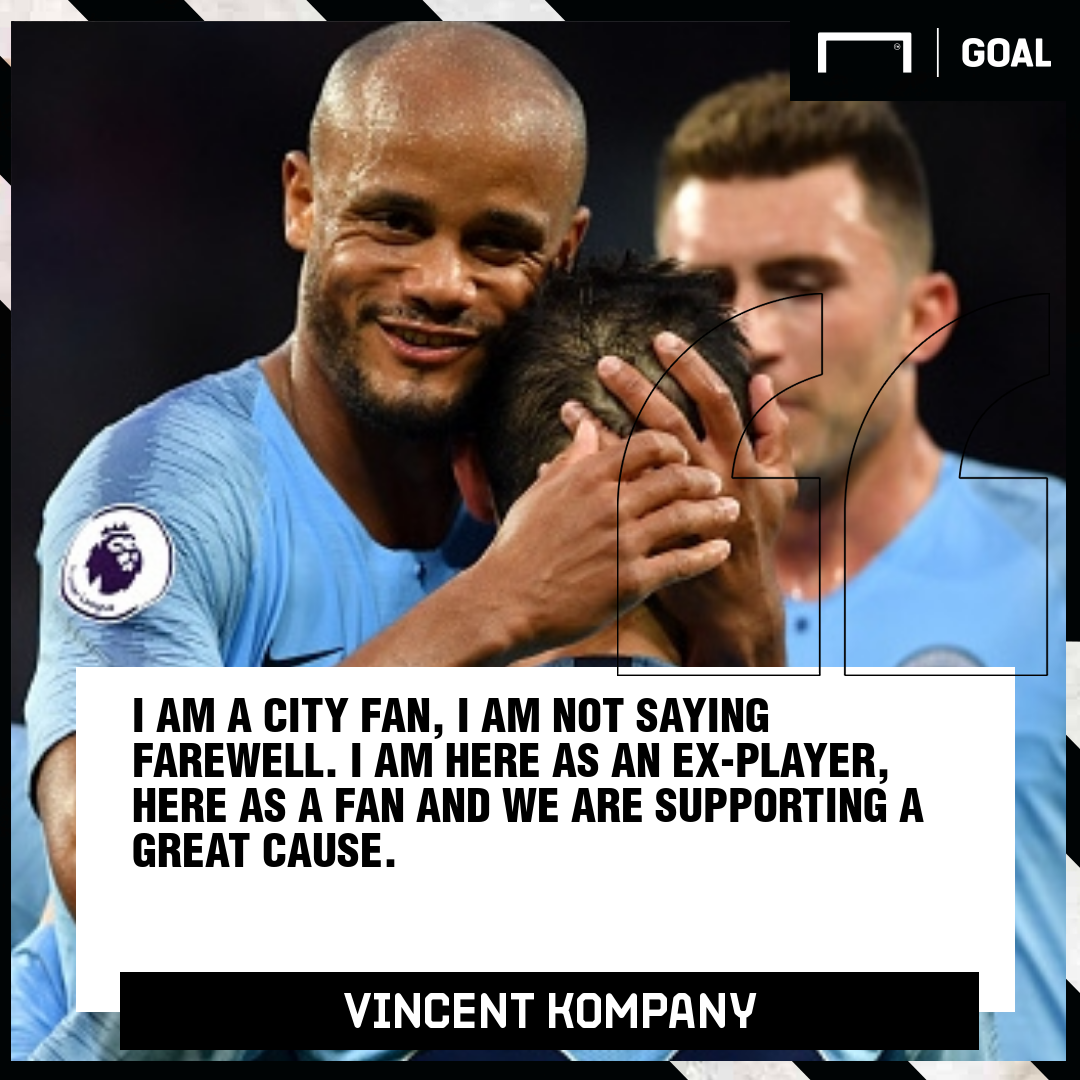 Not only that, United stars like Gary Neville, Ryan Giggs and Paul Scholes will soak up a night of pantomime boos to support Kompany and the event, which has already raised more than £300,000 for a Manchester homeless charity.”It is about celebrating the 11 years I have been able to build into this with some of the players,” he said.”I have got Craig Bellamy, he shaped my ideas about the club without a lot of people knowing it.”I think Mario is coming, he should be but with Mario everything can go wrong.”I remember looking up to so many players [at other clubs]. The first years at City we were getting consistently beaten. And then we turned the tables and we were going to Old Trafford [and winning].”While it will be sad not to see Kompany grace the Etihad turf again, he can at least console himself with the fact that he enjoyed the perfect exit from the club this year.A 25-yard thunderbolt to win the final home game against Leicester City, a tearful walk around the Etihad Stadium with his three Manchester-born children, two trophies in his final two appearances and a microphone drop farewell at the parade to celebrate a domestic clean sweep.He could still be at the club were it not for those injuries, but a contract offer remained unsigned.Kompany never stopped learning. When Pep Guardiola arrived at City in 2016, he saw an opportunity to greatly improve his football knowledge.He watched the Catalan’s coaching closely, particularly his drive for success and his ability to understand and manipulate the game like no one else.With injury setbacks majorly disrupting his final seasons at the club, he finally decided it was time to end his 11-year association.A six-hour meeting with Anderlecht director of football Frank Arnesen – where he spelt out his philosophy – convinced the Belgian club to give him his first opportunity in management.“I am a City fan, I am not saying farewell,” the Anderlecht player-manager added. “I am here as an ex-player, here as a fan and we are supporting a great cause.“I spent 15 years with Anderlecht and 11 with City and I think it sums me up on who I want to be as a person. I put a lot of effort into helping this club be successful.“There is the same idea behind me being at Anderlecht – consistency, loyalty, building a process and achieving. It has been the story of my life.”It is clear to see just how much he loves the city where he met his wife Carla – and on Wednesday evening that affection will be returned.